Danladi Whitten, aka “Master Don” the journey into martial arts began in 1982, at the age of seven.  His youthful goal was consecrated from a simple dream, to achieve a black belt in martial arts.  After ten years of rigorous training, he earned his first of several black belts.  That success thus transcended into a lifelong pursuit of excellence through training and teaching in various martial arts systems.

In 2015, after the sudden death of the instructor, Grand Master Dong Jin Kim, Master Don transitioned into the role of the head instructor at JTR Jujutsu International.  The school membership grew from 30 members to over 100 members in the years following by adding a women’s self-defense and children program. In 2016, he traveled to Seoul, in South  Korea to learn about the history of his late teacher by visiting the dojos, meeting his family, and interviewing training partners.  They were after he travel to Kyoto Japan to participate in the 5th World Butoku Sai international event that hosted over 38 different countries. In 2018, Master Don received his doctorate in physical therapy and operates a private clinical rehabilitation practice over the span of  20 years.

Presenting with over 40 years of experience, Master Don has a lifetime of knowledge in various martial art disciplines. Traveling internationally to Bogota Colombia he taught members of a private security firm. Master Don has received honorary certificates from his instructor service at the National Defense University at Fort McNair, US State Department the DC government.  Martial arts training has shaped his character to be self-respectful, self-disciplined, and above all, have a love for all mankind. A “warrior spirit” is deeply rooted in him and shown through his dedication to his students. Having personally overcome many obstacles in his life and he guides his students into self-empowerment, balance, and inner peace. 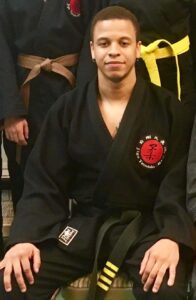 Master Andrae began his training in Taekwondo in 1990 at the age of six, while living in Lynchburg, Virginia under the late Master Ihara.  Master Andrae’s early development in  Taekwondo under Master Ihara helped shaped his lifelong love for martial arts whereby he achieved the rank of Shodan in 1996. After finishing high school in 2000, Master Andrae continued his private training with Master Ihara and black belt instructions under the internationally recognized Kukkiwon Tae Kwon Do Federation. Before leaving for college Master Andrae was promoted to the rank of Nidan after ten years of dedication. From 2000 to 2002, Master Andrae would continue to train under Master Ihara when he was in Lynchburg visiting family. In 2004, Master Andrae moved to the Washington DC area and began training in Combat Jujutsu, Hapkido and Kendo under Grand Master Dong Jin Kim at JTR Jujutsu International while working and studying in college. He trained daily and rose through the ranks where he became a top student in the program and ultimately assuming a Master Instructor role and assisting Grand Master Kim.  Master Andrae developed his greatest strength and  skills Combat Jujutsu, Hapkido, and an array of specialized weapon systems. Master Andrae is the principle instructor in the adult Combat Jujutsu program since 2015 and has earned the rank of Master “Yondan” or fourth degree black belt in JTR Jujutsu. As a member and  instructor MA has dedicated over fifteen years to the JTR students and organziation. Master Andrae has taught members of law enforcement (federal, state, and local), members of the military branches, and federal government agencies. He’s one of two master instructors who continue the legacy of the late Grand Master Dong Jin Kim. A certified member of the Dai Nippon Butoku Kai, International division Master Andrae has preformed Jujutsu demonstrations in front of hundreds while at the Budokai in Norfolk and Va Beach. With over 32 years of combined martial arts experience, he currently holds the ranks of Yondan in Combat Jujutsu, Sandan in Hapkido, Nidan in Taekwondo, and Shodan in Okinawan Kobudo.

We're waiting to hear from you

For general inquiries, please fill out this contact form below and we’ll respond to you as soon as possible. Thanks again!

Get In Touch with Us

We're waiting to hear from you

For general inquiries, please fill out this contact form below and we’ll respond to you as soon as possible. Thanks again!